continuing with my project civilize, which has included a lot of sound deadening, new stereo, getting rid of (or significantly reducing) alternator whine, short through shifter, tightening up interior panels to prevent them from rattling, hood heat refection stuff, new horns (mine just didn’t work anymore, not really civilizing), move to a more driveable and friendly AEMv2, floor and tunnel shielding areas under the car for the exhaust (on going), fixed some oil leaks, and even put an SSD in my tuning computer (sony ux180p).

things i did to hinder this effort – BC264s with all the goodies. there was a significant exhaust noise increase

I took one more step with some exhaust wrap. i had heard that it helps reduce exhaust drone quite a bit and i was quite skeptical about it, but i was sill unhappy with cooking anything near the trans tunnel in the car.

displeasure led to action, i purchased the biggest role of DEI titanium heat wrap i could find and a 20 pack of ~3″ worm clamps. Upon receipt I stared at them for a few a months, then actually decided to start working on the car again. 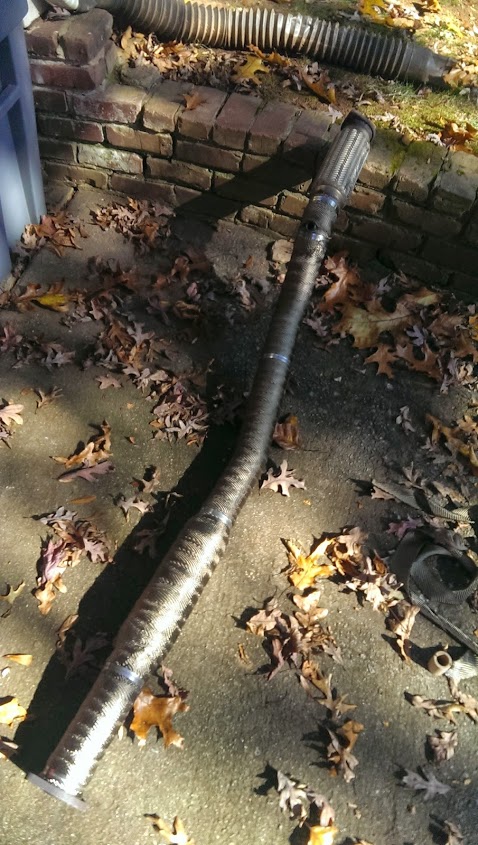 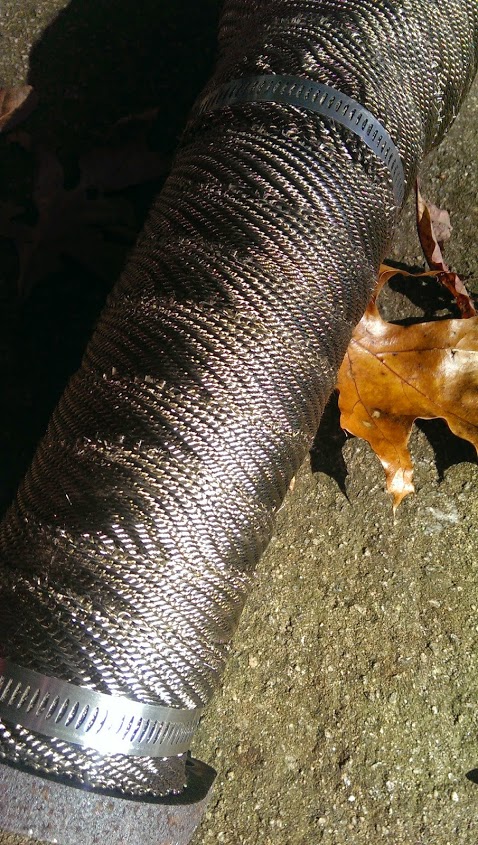 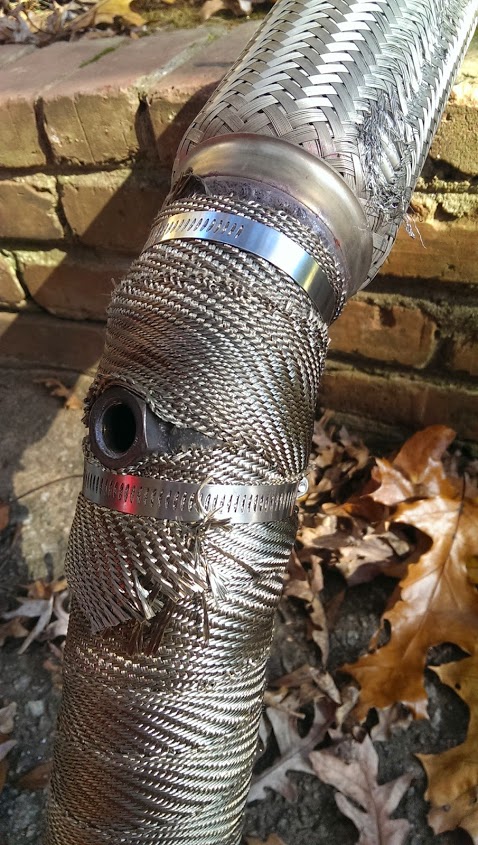 keeping it tight and all one piece alone with a huge steel pipe is harder than it sounds. the wrap continues to want to twist around on you, then you have screw with it, and the wrap then gets loose and you have to re-tighten…. i recommend getting someone to help – they don’t even really have to know what they are doing.

end result – it did reduce drone! adding mass to the pipe alters the resonance frequency and removing the drone from the cruising ranges, very cool!

cabin is cooler and more quiet, which was the goal. i haven’t done the downpipe yet, i actually don’t think i have enough wrap to cover it, but it is next.

all in all it’s a pretty cool mod – i am not sure on the durability of all of this stuff though – i will report back.

i finally wrapped by downpipe and destroyed many things in the process. Shattered 2 vbands, destroyed my new turbo blanket, and thats really about it. In the ends the fruits of the labor are pretty nice. i also took the time to do some floor and tunnel shield around the exhaust and even on the drivers side under the fuel lines. 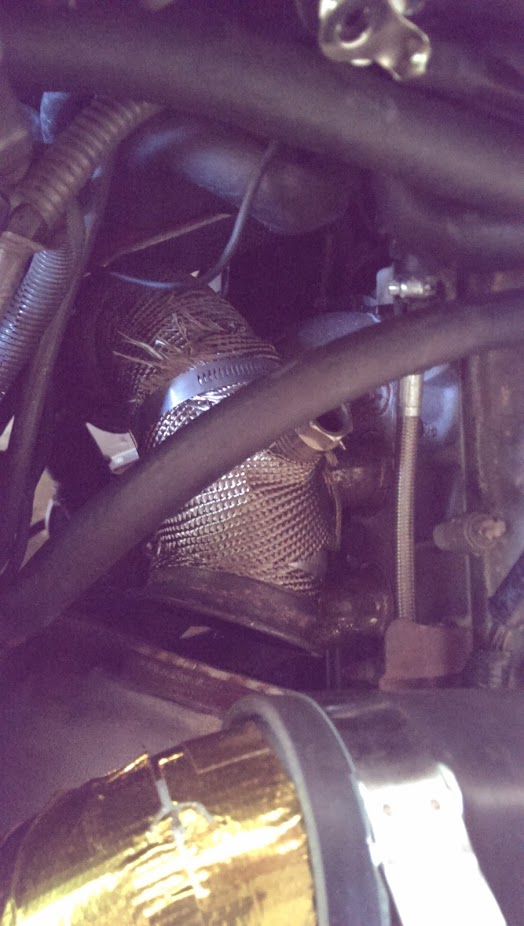 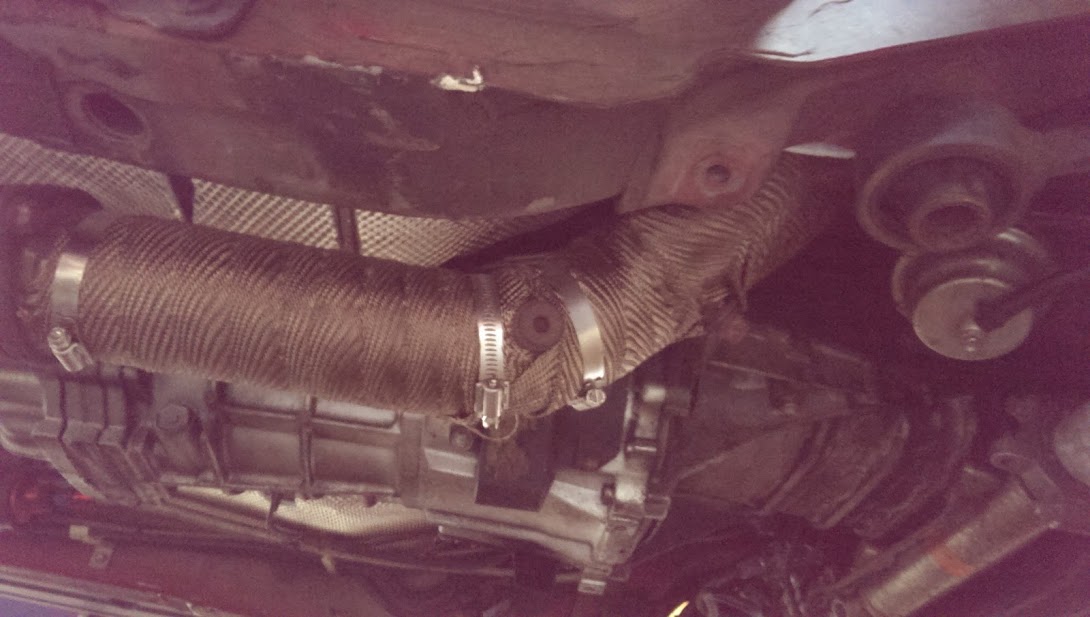 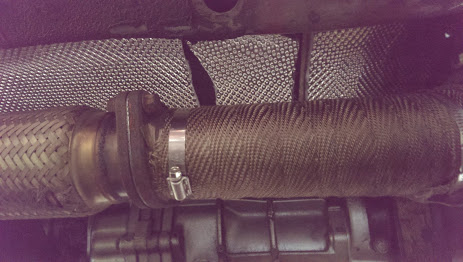 The end result is even more reduced cabin noise, less drone and just a generally more solid sounding and feeling car. not sure if the it was the wrapping r the F&TS but it is slowly becoming a very nice car to drive.

The vibrant v-bands are crap. amazon’s “squirly performance” vbands are WAY better. I used an PPE from summit which i think is the same thing as the squirly.

I want to do more F&TS around the trans and all the way down the exhaust and drive shaft tunnel. it is really pretty awesome stuff, i put a small sliver in the engine bay to my crv and was amazed how much engine noise was reduced.