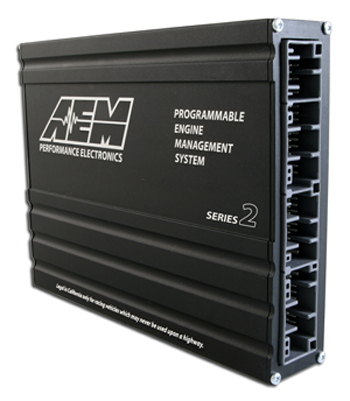 This is some information about how to get an AEM V2 to work in an IS300 using all factory sensors, and the addition of a MAP sensor and wideband o2 sensor, my preference is an innovate LC1 or LC2.  Using this set-up I have passed a plug-in emissions test.  that means legally passing emissions – the stock ecu was very very happy.

Looks like a minor revision of AEM15 aka v1, Moto/Freescale MCU replaced with ST10F269Z(2Q3). Pretty sure GEMS still makes the motherboard for the AEM25 aka v2 as the PCB manufacturer appears different between the main and adapter boards. There are a lot of shared components and architecture between v1 and v2, the major differences being:

– Processor (USB and dual CAN communications, more robust architecture/featureset)
– Coil drivers are massive compared to the wussy 12N6LE FETs used by v1, I haven’t pulled the datasheet yet but between size and being properly heatsinked to the adapter board I expect good things in terms of performance and reliability.
– Injector/low side/high side drivers. The 1NV04 1.7A FETs are still used on some of these, but some have been upgraded to 7NV04 6A pieces. FYI I’ve been using 3NV04 3.5A FETs as upgrades when the v1 burns them out, I have concerns about burning a trace of unknown capacity trying to sink 6 amps @ 14v through the 7NV04’s on a v1 board. Nice to know this box has been designed for the big ones,
– The adapter board is very neatly laid out, has silkscreen illustrating jumper position vs function, and of the small handful of circuits I have traced out so far the component values and identification numbers for the 6050 box are identical to the last evolution of the Honda v1 (1040, 1050, 1052, 1060), and probably others. For example, IAT pull up resistor is 2.2K ohms and labelled R15 across the designs, same for CTS, as well as the CAM/CRANK/etc attentuation resistors used in “MAG” mode.

I was sort of looking forward to reversing this box, but it’s nice to know I don’t have to reinvent the wheel as well as I already stock repair/upgrade parts and have some circuit diagrams sketched out. It’s honestly the “smart money” approach in hardware design, as the v1 was and still is pretty ripped for a ten year old design; fix all the legacy problems (MAG/VR sensor support and learn lessons from the early adapter board design failures) and use a value added strategy (CAN, USB, more input/outputs, refined architecture).

I removed R15 (IAT) and R16 (CTS) pull up resistors. However, removing resistors for the CAM/CRANK attentuation resistors is – despite other posts here – not needed, except on the very early v1 AEMs that do not have JPTx jumpers. I apologize for the crappy picture, but if you work with me and squint a little you can see where JPT1 and JPT2 (leftmost of the four JPTx jumpers) have been set so that no pins are bridging. It’s that easy.  I ended up removing the cam/crank resistors. R2 and R4

1-2 Position: Falling Edge (95% of cars use this. Also use on Hondas when using “smart” coils or COP coils)
2-3 Position: Rising edge (Honda distributor, or when using most MSD DIS systems)

Only one switched 12v input and one permanent 12v – but ground all available power grounds. I did perm power ground and last 18ga switched power ground to the chassis (behind driver front wheel with other grounds)

I did not use sensor grounds for ECT or IAT sensors, but I also am using those as pass through. Did you remove the resistors for those sensors? If so – you don’t need the ground wires and just the input wire